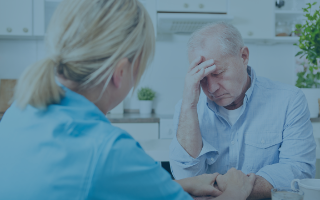 Alzheimer’s and Dementia in Minnesota

Dementia is a broad term that encompasses loss of memory and cognitive abilities severe enough to cause interference in the patient’s day-to-day living. Alzheimer’s, the most prevalent cause of dementia, but not the only one, is responsible for nearly 75% of these cases.

Because it is a progressively degenerative disease, dementia symptoms in Alzheimer’s worsen over time to a degree where the afflicted individuals may be unable to react to their surroundings. Alzheimer’s disease now ranks sixth among the topmost causes of death in the country.

While most people with Alzheimer’s are above 65 years of age, it is not just a disease of old age. Almost 200,000 people under 65 suffer from early-onset Alzheimer’s. An individual diagnosed with Alzheimer’s goes on to live for an average period of four to eight years after the initial diagnosis.

Presently, there is no cure for the disease but as the research continues, there are treatments that can slow down the symptoms. These treatments bring hope as they help in improving the quality of life for the patients and caregivers.

Let us look at some facts to make ourselves more aware and join the fight against the disease in Alzheimer’s and Brain Awareness Month.

How Pervasive Is Alzheimer’s in the US?

According to alz.org, women make up almost two-thirds of Alzheimer’s-stricken Americans. While older Hispanic Americans are likely to fall prey to Alzheimer’s or other dementias, around one to one-half times more than older Whites, older Black Americans are up to twice as much risk.

The number of new and existing cases will continue to grow to reach an estimated 12.7 million people above the age of 65 by the year 2050.

Alzheimer’s can be fatal. One-third of the elderly people die because of Alzheimer’s disease or some other dementia. The death toll from Alzheimer’s is now more than the combined total from breast and prostate cancer.

While most major diseases have seen a decline in deaths, Alzheimer’s and other dementia-related deaths have shown a significant increase in numbers. There was an increase of 145.2 percent in deaths from Alzheimer’s between 2000 and 2019, while the deaths from heart disease, which is the leading cause of death in America, decreased by 7.3 percent.

What Do Alzheimer’s and Other Dementias Cost the Nation?

Projections for the year 2050 reflect an increase in the cost to more than $1.1 trillion unless we see the development of a treatment to prevent or stop the progression of the disease. Both the government and out-of-pocket spending are set to witness a dramatic three-fold rise.

Some Statistics about the Caregivers

Friends, family members, or unpaid caregivers constitute 83 percent of the help for people with dementia in the US. Almost one-third of the caregivers are themselves above 65 years of age.

An estimated two-thirds are women, and over one-third of the caregivers are daughters of individuals with Alzheimer’s or some other dementia. Approximately one in four caregivers caring for an aging parent need to care for children under the age of 18, as well.

For Your Family’s Peace of Mind

The legal experience of our elder law attorneys enables them to interpret intricate legal issues for clients and their family members. Contact our Richfield-based law firm by calling us at (952) 925-4147 or send us a message to learn more about our long-term care planning services.