Divorce and Wills: Divorcing Without Updating Your Will 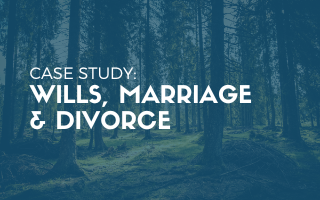 In Minnesota, what happens if someone signs a will that leaves part of their estate to their spouse’s heirs if their spouse dies first, but then divorces their spouse, neglects to update their will, and dies? Lett’s explore divorce and wills.

A recent case has determined the answer to this complicated question.  The people who would be the former spouse’s heirs, if the former spouse had died just before the divorce, still take under the will.

That question wasn’t easy to answer. In the estate of Mathew Tomczik, two of the four judges who looked at the question (the district court judge and one of the appellate judges) read Mathew’s will and the statute and decided that Mathew’s heirs should receive all of his estate. The other two judges who looked at the question (the other two appellate judges) decided that those who would be the heirs of Mathew’s former spouse should receive part of his estate, which is where the case ended at the Minnesota court of appeals.

In 1992, Mathew Tomczik and Sara Headley married. In 1995, Mathew signed a will naming Sara as the devisee of his estate. (A devisee is a person designated to receive property under a will. An heir is a person who receives property under a statute when there isn’t a valid will.) Mathew’s will also said that if Sara dies before Mathew, then Mathew’s heirs get half of the remainder and Sara’s heirs get half. In 2019, Mathew and Sara divorced. In 2021, Mathew died. Before his death, Mathew didn’t remarry, revoke his will, or update his will.

When Mathew died, Sara was still alive. If she had died just before the divorce, her heirs would’ve been her parents, the Headleys. (Note that the living don’t have heirs. Because you’re reading this, and therefore alive, you don’t have heirs. Your heirs are relatives who are alive when you die. Heirs are determined at death, and cannot be determined before death, so determining Sara’s heirs required the legal fiction that Sara had died just before the divorce.)

Mathew’s heirs were his siblings. Mathew’s brother Michael Tomczik petitioned the district court to probate Mathew’s will and to appoint Michael as personal representative (executor) of Mathew’s estate. Michael’s petition identified Mathew’s siblings as heirs and devisees, identified Sara as having no legal interest, and did not identify the Headleys. The Headleys objected to Michael’s petition because they would be Sara’s heirs if Sara had died before Mathew, but Michael did not include them in his petition. The case was between Michael and the Headleys.

Divorce Does Not Revoke a Will in Minnesota

Minnesota law provides that when a couple is divorced, if a will is not updated and leaves property to a former spouse, that former spouse is treated as though they died immediately before the divorce. This is not something that should be relied upon, as is clear from the dispute leading to the Tomczik case. If you have a will and get divorced, update your estate plan, including your will and the beneficiary designations on all your accounts to ensure your property is passed according to plan.

There have been a few cases like the Tomczik case. In the first, the estate of Ivan Kerr, the will referred to “my stepdaughter, Dawn M. Valentine.” After the divorce in that case, Dawn Valentine was no longer a stepdaughter, but since she was referred to specifically by name, she was ruled to be a devisee nonetheless. By contrast in the Tomczik case, Mathew didn’t refer to Sara’s parents in his will specifically by name, instead referring only to Sara’s heirs.

The second case like the Tomczik case, the estate of Kristie Danca, had the same common residual clause: if the spouse dies first, half the remainder goes to the spouse’s heirs. In the Danca case, the Minnesota court of appeals reasoned that because a spouse’s heirs are defined by implicit reference to a marriage, the marriage would have to survive for the spouse’s heirs to receive anything under the will.

In the Tomczik case, the district court followed the reasoning in the Danca case, ruling that because the statute automatically revoked Sara’s status as a devisee, by extension, it similarly revoked the Headleys’ status as devisees. The remainder of Mathew’s estate would go entirely to his siblings.

The Headleys appealed their loss to the Minnesota court of appeals. On appeal, two of the three appellate judges reversed the district court on the basis that the statute requires Mathew’s will to be “given effect as if the former spouse died immediately before” the divorce, and Mathew’s will unambiguously left half the remainder of his estate to Sara’s heirs. The Headleys won even though they weren’t specifically named as Dawn Valentine had been in the Kerr case.

One of the three appellate judges dissented on the basis that since the former spouse is still alive, determining her heirs is impossible (since the living don’t have heirs). The dissenting judge also noted that if Sara had remarried, her heir would’ve been her surviving spouse, which would be an absurd result (Sara’s new husband would’ve received half of the remainder of Mathew’s estate). Since the heirs weren’t specifically named as Dawn Valentine had been in the Kerr case, the dissenting judge would’ve followed the reasoning in the Danca case and affirmed the district court.

The Importance of Hiring an Elder Law Attorney

In both the Kerr case and the Tomczik case, the Minnesota court of appeals reasoned that the Minnesota legislature “could have chosen to revoke gifts to relatives of a former spouse, but did not do so.” The Minnesota court of appeals was unwilling to ignore the Minnesota legislature’s omission of this provision or to add such an extension. Therefore, unless the Minnesota legislature revises the statute, the law in Minnesota is that divorce doesn’t automatically revoke designation of a former spouse’s heirs in a will. Such a revocation would need to be in the will itself, illustrating the importance of having a will drafted by an attorney familiar with these kinds of issues. Otherwise, the personal representative and the devisees will come to understand the importance of having good elder law litigation attorneys, especially ones familiar with appeals.

Case Source – State of Minnesota in Court of Appeals